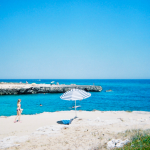 Deauville is a small seaside town in northwestern France.

It’s one of the closest beaches to Paris and is perfect for a day trip.

In this article, I’m going to introduce this beautiful city and what I did there!

A lovely cityscape with half-timbered buildings

Deauville is a resort in the Normandy region of France. It has been known as a vacation destination since the 19th century. Besides the beach, it is famous for casinos, horse racing, and American film festivals.

The streets are lined with half-timbered buildings, making you feel like you’re in a fairy tale world.

* Half-timbered style (timber framing) is one of the architectural styles, which is a style often seen in Northern Europe. The characteristic is that the pillars and other framework parts appear on the exterior.

Luxury brand boutiques line the center of the city, with half-timbered buildings. Not only does it have a sense of luxury, but it also has some cuteness, and you can enjoy shopping in a different atmosphere from Paris.

Unlike Southern France, such as Nice and Biarritz, Deauville’s beach is characterized by a calm and quiet atmosphere.

Promenade des Planches is lined with plates bearing the names of movie stars. It is a lovely way to spend time walking and looking for the name of your favorite movie star.

The city is also known as cinema. Since 1975, this city has been a place for an annual movie festival called Deauville American Film Festival (Festival du cinéma américa in de Deauville).

Normandy is famous for its seafood. So you should try delicious seafood here in Deauville. When I walked down the streets full of restaurants, I saw many people eating mussels in large pots.

I also often saw people having galette, a French salty crape, which is one of the Normandy specialties.

【Surfers Paradise】6 things to do in Biarritz

The Shops You Must Check in Paris

【The City of Art Nouveau】 7 Things to Do in Nancy